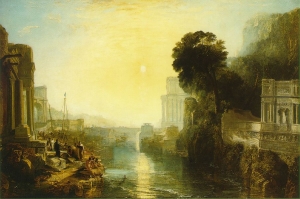 Turner, John Mallord William (1775-1851). One of the finest landscape artists was J.M.W. Turner, whose work was exhibited when he was still a teenager. His entire life was devoted to his art. Unlike many artists of his era, he was successful throughout his career.

Joseph Mallord William Turner was born in London, England, on April 23, 1775. His father was a barber. His mother died when he was very young. The boy received little schooling. His father taught him how to read, but this was the extent of his education except for the study of art. By the age of 13 he was making drawings at home and exhibiting them in his father’s shop window for sale.

Turner was 15 years old when he received a rare honor–one of his paintings was exhibited at the Royal Academy. By the time he was 18 he had his own studio. Before he was 20 print sellers were eagerly buying his drawings for reproduction.

He quickly achieved a fine reputation and was elected an associate of the Royal Academy. In 1802, when he was only 27, Turner became a full member. He then began traveling widely in Europe.

Venice was the inspiration of some of Turner’s finest work. Wherever he visited he studied the effects of sea and sky in every kind of weather. His early training had been as a topographic draftsman. With the years, however, he developed a painting technique all his own. Instead of merely recording factually what he saw, Turner translated scenes into a light-filled expression of his own romantic feelings.

As he grew older Turner became an eccentric. Except for his father, with whom he lived for 30 years, he had no close friends. He allowed no one to watch him while he painted. He gave up attending the meetings of the academy. None of his acquaintances saw him for months at a time. Turner continued to travel but always alone. He still held exhibitions, but he usually refused to sell his paintings. When he was persuaded to sell one, he was dejected for days.

In 1850 he exhibited for the last time. One day Turner disappeared from his house. His housekeeper, after a search of many months, found him hiding in a house in Chelsea. He had been ill for a long time. He died the following day–Dec. 19, 1851.

Turner left a large fortune that he hoped would be used to support what he called “decaying artists.” His collection of paintings was bequeathed to his country. At his request he was buried in St. Paul’s Cathedral.

Although known for his oils, Turner is regarded as one of the founders of English watercolor landscape painting. Some of his most famous works areCalais Pier, Dido Building Carthage, Rain, Steam and Speed, Burial at Sea, and The Grand Canal, Venice.