Regency Fashion makes clothing using examples from the relevant style period.  A small number of costumes is available for rental. Ask about the possibilities of costumemaking by sending an e-mail. For examples go to The Gown, Spencer & Pelisse or Regency Men’s Clothing. Or have a look at our Portfolio or Facebook.

During the Regency or Empire period 1795-1820,  clothing became informal in style: Brocade, lace, wigs and powder were no more. Regency fashion was influenced by ancient Greece and statues. Tight laced corsets were not needed for the high waist and natural shape, the simple skirt and wide neckline. Women at Court as Josephine (Napoleon’ s wife) and Jane Austen’s heroïnes, would have worn these clothes.

The dresses were made of thin fabrics. As some say they were  made moist to create the perfect fit. In  Greece this was not such a problem, as it is warm enough there. But in the Northern European countries was the thin clothing certainly not healthy, althoug it was unusually hot at the end of the 18th century. The underlayers were reduced and only a petticoat or underdress was worn with a long or short stay or corset to create the Regency shape. For the dresses thin and pure fabrics were used such as muslin: cotton, silk or linnen.  The colors were mostly white, cream and later blue, green and also yellow or red. Wool was also used for cloaks, pelisses, spencer jackets and shawls . See for more historic information The Gown and Spencer & Pelisse

The hairstyles were also ins 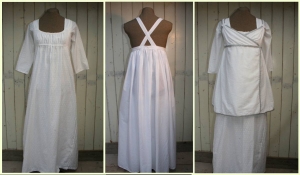 pired by ancient Greece. Married and older ladies wore lace caps when they were inside the house. Necklaces, bracelets and earrings often feature a cameo (ornament with antique carved women head). Jewelry at daytime were simpler than in the evening. Turbans were also worn, decorated with trims and ostrich feathers. That’s when long gloves, made from leather or silk, and tiaras were worn. Not to miss the matching handbag (reticule) and fan. For more information go to Accessoires

When outside during the day, ladies wore half boots. When inside and in the evening flat shoes were worn. In the colours green, pink, blue and white. 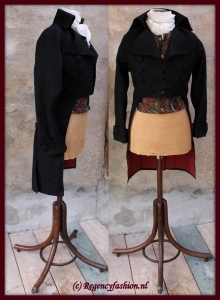 During the day long trousers were worn with boots. In the evening knee long trousers with flat shoes. Different to the Barok period not as much decoration and colour was used. For more see Regency Men’s Clothing.